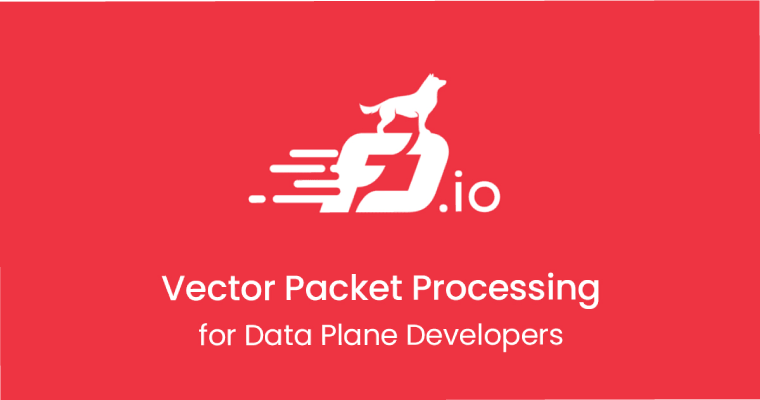 There are multiple challenges to a Data plane system developer. One major challenge is - how to maintain high-speed packet processing performance with ever increasing line speed to hundreds of Gbps or Tbps. Another challenge is in the handling of rapidly growing routing table size, e.g., more than 500,000 entries. In this blog we are providing an overview of a concept- Vector Packet Processing (VPP) technology along with insights into what goes on under the hood. This will enable the developers to get a basic understanding to get streamlined into actual development using VPP. In depth technical details are omitted and instead a high level overview of basic underlying technology is provided. We have included few very useful links to the latest topics on development of systems and applications using VPP.

Driven by media-rich and bandwidth-intensive Internet applications, line packet speeds have gone from 10G/40G to 100Gigabit Ethernet and beyond. Programming of Network switches (or data planes) has become increasingly important with increasing network virtualization in the Internet infrastructure and large-scale data centers.

To overcome these limitations, the concept of fast data plane (FD.io) was introduced. FD.io is a secure universal data plane which is a cross platform network stack supported by multiple hardware vendors. VPP is the technology used in FD.io to achieve high speeds at low computing power.

Now let’s examine what exactly VPP or Vector Packet Processing is. To understand the concepts of VPP, we first need to understand how packets were processed before VPP. The basic components of packet processing in a Linux system are a NIC or network interface card, the kernel, and the application which processes the packets. The following diagram represents a network packet at wire level.

This contains information like the headers which help in routing the packet to the destination as well as the payload intended for the IoT application. The headers contain information like the MAC address of the NIC to which this packet is intended. The NIC has a set of transmission and receive queues per CPU. The flow of packets is as follows.

The packet arrives at the NIC, packet is copied to kernel memory, kernel generates an interrupt to start the packet processing, a set of routines are called to pass the packet to the protocol stack, the IP filter routines for firewall handling are invoked, it is determined by the kernel whether the packet is intended for local delivery or forwarding, packet is transferred to the TCP stack and finally packets are passed on to the application via the socket read system call.

There are a whole lot of procedures to get the packet to the application layer. Natural question coming to our mind will be – can this flow be optimized further? Precisely this optimization is done by a framework used in VPP called DPDK***. DPDK stands for Data Plane Development Kit. DPDK optimizes the above flow as depicted in the in the below diagram: How does DPDK achieve this optimization? It provides a set of libraries and NIC poll mode drivers, which offload TCP packet processing from kernel to the application process in the User Space. Couple of techniques is used by DPDK namely FastPath (Kernel bypass) and Poll Mode Driver (PMD). As earlier mentioned FastPath eliminates the context switching when moving between kernel and user space, and PMD helps in polling for the packet instead of the interrupt mechanism to process the packet. DPDK also contains other techniques for aiding the packet processing which are not discussed in this blog. 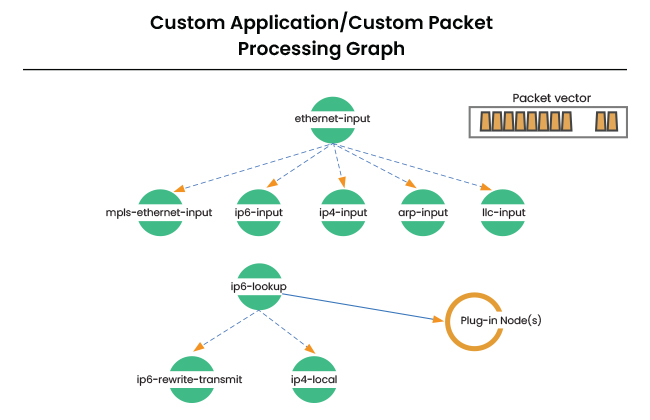 New graph nodes can be introduced to the above hierarchy to add custom processing. VPP provides an extensible framework to introduce new graph nodes.

Vector packet processing resolves this inefficiency by processing more than one packet at the same time, since all packets have to go through the same instruction set in sequence. This avoids the continuous loading and unloading of the instruction set to and from the cache, thereby reducing the cache misses as well as read latency. As the size of the vector increases, the processing cost per packet reduces.

The main advantage of VPP is that it achieves high speeds without requiring multiple processing cores that are needed to achieve the same speeds in traditional Linux processing. Currently FD.io and VPP are being used to build high end virtual Load Balancers, Firewalls, Switches and Routers.

For getting started with VPP, there are prerequisites like specific hardware as mentioned in below link: https://core.dpdk.org/supported/

A guide to getting started is available at the following link : https://my-vpp-docs.readthedocs.io/en/events-section/gettingstarted/index.html

There are both developer versions as well as commercial versions of VPP, latter can be used out of the box to create applications, and former can be used to make contributions to the VPP open source.

And finally a practical use case of VPP is development of a next generation firewall (NGFW) with all advanced features like Deep Packet Inspection. First attempts at a NGFW firewall have been implemented using VPP and Snort by Netgate, the open source networking platform is called TNSR.
https://www.netgate.com/blog/beyond-next-generation-firewall-take-me-there.html

To summarize, VPP is a path breaking technology which will be used for many practical applications in the packet processing ecosystem and it will have widespread uses. Everything You Need To Know About Edge Computing Using IoT